“What is fitness and who is fit?”

This was the question posed by Greg Glassman, founder of CrossFit, back in the late 1990’s. At RxFIT, we adhere to the CrossFit methodology when it comes to exercise. It is the most effective way to get fit. It works just as well for your 80-year old grandma as it does for NFL football players.

The purpose of this article is to dive deep into our prescription of exercise. Put simply, at RxFIT we recommend five days a week of constantly varied, functional movements, performed at a high intensity.

We recommend reading Glassman’s 2002 landmark publication titled What is Fitness? You can find it here.

If you were to answer the question Glassman posed two decades ago, who would you consider is the “fittest?”
Would it be the winner at the Kona, Hawaii Ironman, an NCAA Wrestling champion, or a gold-medalist Decathlete?
If that’s tough to answer, what about this one…
Who’s fitter between these three athletes: Michael Phelps, LeBron James, or Lance Armstrong?
In a lifting competition, you would say that the person who lifts the most weight is the strongest. In a long event, you would say that the person who swims, bikes, and runs the furthest has the most endurance. In a track race, you would agree that the person who finishes first is the fastest.
What’s difficult about the question of “Who is the fittest?” is that everyone has a different definition of fitness.
To ensure that we’re under the same assumption of what fitness really is, it would be helpful to define it.
“Science is about measurement and prediction. Without measurable, observable, repeatable data concerning the fundamental physical units of kinematics (mass, distance, and time or MKS) there is no science of human performance. This is true of the planets, automobiles, and exercise.”
In its simplest form, fitness is work capacity across broad time and modal domains. In other words, a test of fitness needs to include tests of strength, endurance, and speed. Let’s break this down further.

What is “work capacity” and how can I increase it?

Work capacity is mathematically defined as force x distance / time. The greater your work capacity, the fitter you are. My physics professor would always say this before a test: “Large loads (force), long distances (distance), quickly (time).”

So, when it comes to fitness, the equation would look like this:

(How much weight can you pick up) + (How far can you go without stopping) + (How fast can you do it).

You increase your work capacity by improving your strength, endurance, and speed.

Being really good at sprinting short distances doesn’t mean you are fit unless you can also run long distances.

We include the phrase “broad time” into our definition because of the metabolic pathways that provide the body with energy. 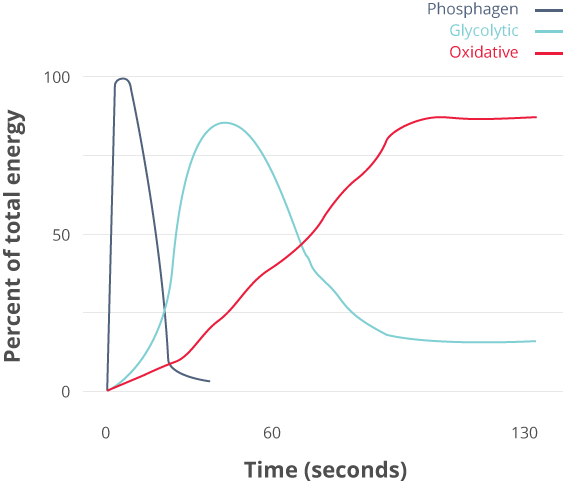 You must cross train these pathways equally in order to reap the benefits that are associated with each metabolic pathway (i.e. the phosphagen pathway is great for building bone density and will prevent diseases such as osteoporosis).

If I can run 40 yards, 1 mile, and a marathon faster than you, but you bike those same distances faster than me, who is fitter? The runner or the biker?

“Modal domains” is just another way of saying “types of exercises.”

At RxFIT, we write workouts that incorporate running, rowing, biking, and skiing on different machines. We also implement body-weight exercises such as: pull-ups, push-ups, sit-ups, and dips. And we would be hypocritical if we didn’t also include weight lifting movements like: deadlifts, back squats, power cleans, and shoulder presses.

Another important piece here is that we also mix and match these in as many different combinations as creativity will allow. This doesn’t just make exercise more fun but also elicits an extremely potent metabolic stimulus. We call this form of exercise “Metcons” (short for “Metabolic Conditioning).

For example, we’ll perform pull-ups and deadlifts in the same workout. We will also run a mile before performing 100 push-ups and 10 heavy back squats.

In addition to the above, we also incorporate a lot of different pieces of equipment. For example, we perform overhead presses with barbells, dumbbells, kettlebells, medicine balls, and sandbags. There are additional reasonings behind this that go beyond the scope of this article.

Fitness, therefore, is the cumulative sum (or the highest average) of work capacity against as many different time domains and modalities.

My favorite test of fitness would come from a bingo hopper (the container that bounces the bingo balls around before pulling one out). Simply write up a bunch of different workouts with a group of friends. Include everything: tests of strength, flexibility, endurance, speed, power, agility, accuracy, balance, etc. Cut them out individually and throw them into a hopper.

Draw ten workouts from the hopper and complete them over the course of a week. After each workout, record who came in first place, second place, third place, etc. Award each placing with one point (i.e. first place = 1 point, second place = 2 points, etc.).

The friend with the least amount of points at the end of the ten-workout test is then the fittest.

This is a scientific and mathematical approach at determining the fittest.

This is “work capacity across broad time and modal domains.”

And the best way to exercise (if you want to get “fitter”) is by performing five workouts a week of constantly varied, functional movements, at a high intensity.

Tyler Welch August 9, 2022
Schedule Your free intro
Talk with a coach about your goals, get the plan to achieve them.
Start Now

fill out the form below to get started!

Take the first step towards getting the results you want!

learn more about our membership options

Fill out the form below to get started.